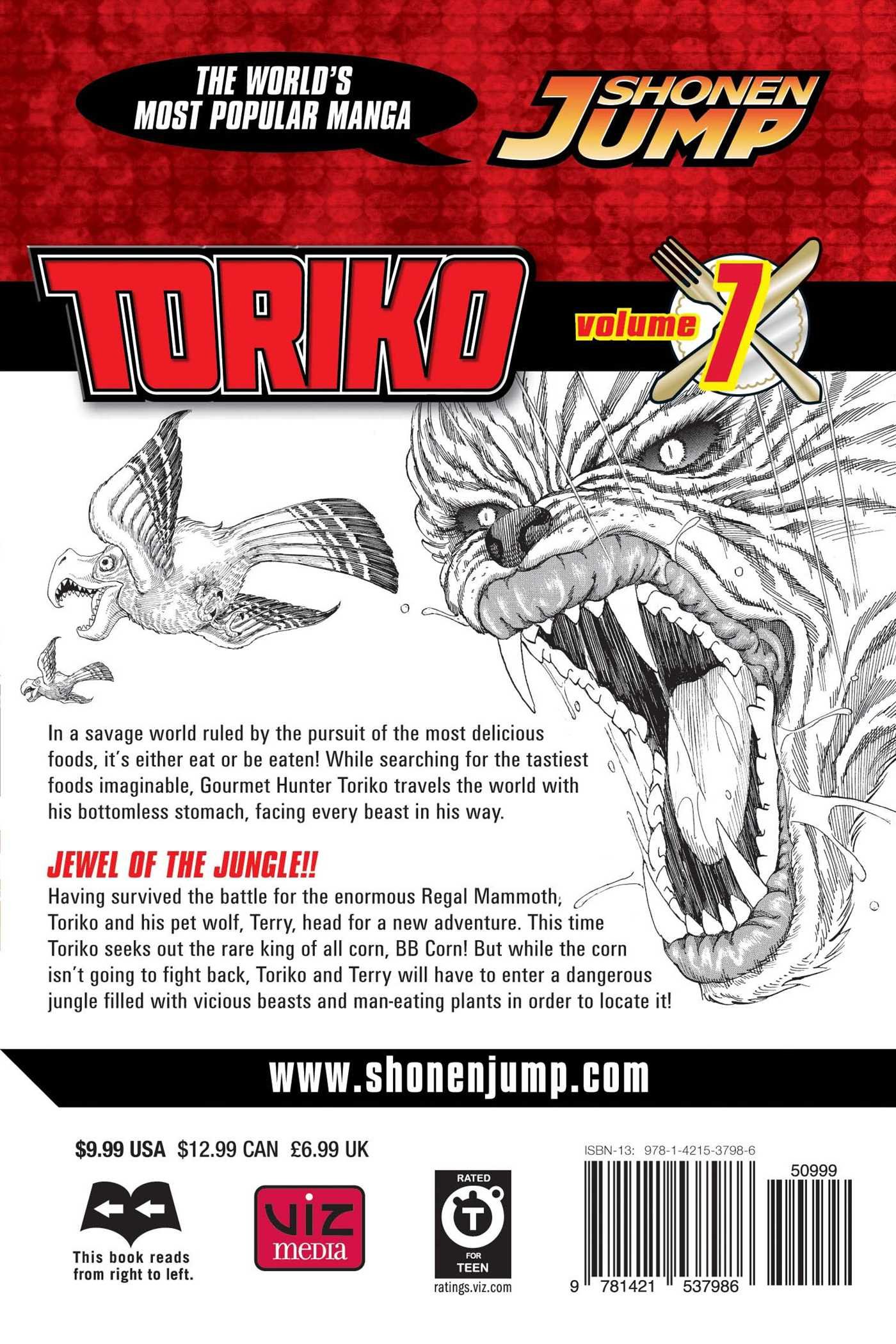 
Vol 8. Toriko and Terry succeed in getting their hands on the delicious BB Corn, but a new challenge is just beginning. Next on the menu is a legendary soup that only appears once every one hundred years. Toriko: Gormet Hunter Toriko! Vol 1. This is the great era of gourmet food!

And only Toriko can hunt down the ferocious ingredients that supply the world's best restaurants. As a Gourmet Hunter, Toriko tracks and defeats the tastiest and most dangerous animals with his bare hands. But has he met his match with an eight-legged alligator the size of a tank? Toriko: Coco! Vol 2. Toriko needs help when he's hired to capture the rare and delicious Puffer Whale. Only his old friend and fellow gourmet hunter Coco can remove the Puffer Whal's poison! But will this team be enough to beat the other dangerous hunters to the prized ingredient? Toriko: The Thing!!

Vol 3. Toriko may have succeeded in capturing the Puffer Whale, but removing its poison is a whole other challenge. His friends Coco and Komatsu better use their delicate skills with a knife to remove the poison pouch, or Toriko's never going to get to enjoy the delicious spoils of a successful hunt. But what is the mysterious creature that has appeared to ruin all the fun? Toriko: Sunny!! Vol 4. But can Toriko defeat this bionic brute and protect the injured Battle Wolf? And when the gigantic Regal Mammoth is the next target of the IGO, Toriko's going to need the help of another old friend.

Toriko: The Regal Plateau!! Vol 5. Toriko can handle the wildest beast that nature has to offer, but the team may be in some serious trouble when more robots from the evil Gourmet Corp. Toriko: Ten-fold!! Vol 6. In order to find the precious Jewel Meat buried deep inside the enormous Regal Mammoth, Toriko has ventured into the beast's body.

But can he locate and eat this delicious treat before it's too late?! Toriko: Jewel of the Jungle!! Vol 7. Having survived the battle for the enormous Regal Mammoth, Toriko and Terry head for a new adventure.

This time Toriko seeks out the rare king of all corn, BB Corn! But while the corn isn't going to fight back, Toriko and Terry will have to enter a dangerous jungle filled with vicious beasts and man-eating plants in order to locate it! December 11, Gourmet Reviver Teppei Joins the Battle! Wondrous Power! December 4, Tommyrod's Full-Power Mode Explodes! Ultimate Desperation! Toriko attempts to end his epic battle with Tommyrod by unleashing a Thirteen-Fold Spike Punch, but the bug tamer counters by revealing the true depths of his devious strength!

November 27, Fierce Battle! Toriko vs. Head-on Fight! November 20, Toriko heats things up in a heroic attempt to end the insect onslaught! Elsewhere, Komatsu finally reaches the location of the Century Soup - only to find that there is no soup! November 28, Match and Takimaru's Desperate Attacks! Takimaru relies on lessons from his past to settle the score with his flexible foe, and Match puts his blade to the ultimate test against an opponent clad in Crash Turtle armor! November 6, Takimaru's Full-Out Corkscrew Shot!

Toriko fights to survive a deadly swarm of insects, and Takimaru fights for his life against an unbreakable opponent. October 30, Tommyrod vs Toriko! Glorious Bug Tamer! When Toriko's hand is frozen solid during a deadly encounter with a Gourmet Corps bug tamer, the burden of collecting the Century Soup falls squarely on the small shoulders of Komatsu! Is the little chef up to such a big task? October 23, Toriko and Komatsu team up to turn a deadly Silver Grizzly into a scrumptious soup. A villainous member of the Gourmet Corps is hot on their trail, but help is on the way in the form of a Heavenly King!

October 16, Hurry While It's Hot! Zonge stumbles upon a group of angry Growlruses, Toriko and company go head-to-head with a herd of ferocious Freezer Bison, and a villainous vice chef unleashes an army of beastly insects! October 9, Disembarking at Freezing Hell! Challenge of the Gourmet Hunter Army! Tundra Dragons and killer icicles are just a few of the obstacles standing between Toriko and the Century Soup.

If the elements don't kill him, there is a mean, green, GT Robot waiting to finish the job! October 2, Rivalry Between Gourmet Hunters! Meeting at the Saloon! Toriko, Komatsu, and a ravenous army of Gourmet Hunters set off in search of the legendary Century Soup. Their journey will take them to Ice Hell, but they'll have to survive a Sharkrocodile attack to arrive in one piece!

September 25, Setsuno's Century Soup! Komatsu and Toriko are treated to an ultra-exclusive tour of Setsuno's kitchen, including the top secret area where she prepares Century Soup! Inspired, they set off in search of the genuine article, but trouble lies ahead! September 18, The Amusement Park of Eating! Toriko and Komatsu travel to the city of culinary dreams for a special dinner with a living gourmet legend! Elsewhere, the sinister Gourmet Corps reveal the secrets behind their desperate desire for the Jewel Meat!


September 11, Grinpatch vs. Pressure of Madness! Toriko continues his battle with the corn-stealing, straw-wielding villain known as Grinpatch, and Komatsu desperately races to make it home before a rare dish of fish becomes nothing more than bubbles! September 4, The Gourmet Corp. Toriko must take his powers to the next level if he hopes to defeat a ravenous assassin from the Gourmet Corps.


Elsewhere, Komatsu learns of the legendary ingredient with the power to stop - or start - wars! August 28, For Terry's Sake! Toriko and Terry finally find the deliciously elusive BB Corn, and Komatsu must depend on a special blend of spices to survive an encounter with a giant lizard! August 21, Show Me, Terry, King in the Making! The Talent of Battle! Time is running out for Komatsu to complete his fishy dish, and Toriko watches as Terry faces off against a beastly Zombie Wood.

Will the Battle Wolf show his true power - or fall to his ferocious foe? August 14, Toriko, Search for the BB Corn! Komatsu must find an exquisite sauce to top a dish of very rare fish, and Toriko prepares to venture deep into the deadly Wu Jungle in search of food fit for a Battle Wolf! August 7, This Is the Strongest Spike Punch! Super Toriko, the Fists of Anger! When the dust finally settles on the battlefield, dinner will be served!